The 7th Kentucky at Champion Hill

National colors of the 7th Kentucky Veteran Infantry. This flag was given to the regiment when the veterans of the 7th, 19th, and 22nd Kentucky were consolidated into one regiment.

John Lucas, former commander of Company B, resigned in the fall of 1862, during the time of Lieutenant Joel Ridgell's ascendancy to the command of the 7th Kentucky. Ridgell resigned in January 1863, as expected, due to his frequent spats of ill health. With a vacancy in command, Lucas was commissioned the new Lieutenant Colonel of the regiment shortly thereafter. He led the regiment through the Vicksburg Campaign, eventually receiving a severe wound in the thigh during the second battle at Jackson, Mississippi in July 1863.

The 7th Kentucky, along with the 118th Illinois, 49th Indiana, and 69th Indiana, made up the brigade of T.T. Garrard, the regiment's original colonel. The regiment participated in the victory at Port Gibson, and then at Champion Hill the 7th pushed against the Confederate line along the Middle Road, nearly in constant skirmish with Cumming's Georgians. The regiment deployed on the north (right) side of the road, and then several companies moved forward as skirmishers. Had McClernand been his aggressive self, Osterhaus' division should have slammed into the Confederate flank and ended the battle much quicker, and delivering an even heavier defeat for Pemberton's army. As a consequence of his mysterious tepid advance, Garrard's brigade was near the heaviest of the action, but not ordered into the fray.

Colonel T.T. Garrard, brigade commander.
Map courtesy of the American Battlefield Trust. This map is good at showing the location of the 7th Kentucky and Garrard's brigade, but I believe they were more involved than the map suggests.

On the morning of the 16th of May, 1863, being in command of the Seventh Regiment Kentucky Volunteer Infantry, I was ordered to move forward with said regiment to the front of the First Brigade, which was then on the road leading from Raymond, Miss., to Edwards Depot, on the Vicksburg and Jackson Railroad, about — miles from Raymond. In obedience to said order, I advanced with my regiment as prescribed, preceded by one company of the Third Illinois Cavalry, and throwing forward a few vedettes and Companies A and E, of my regiment, as skirmishers, advanced about 2 miles, where the cavalry finding the enemy’s pickets, we halted, and after a short reconnaissance resumed the advance, and proceeded about 1&1/2 miles farther on said road, where we found the enemy in force. My regiment took position on the right of said road, first throwing Companies A, F, and D forward as skirmishers, and afterward the remainder of the regiment moved forward, and, driving the enemy’s skirmishers from their position, the regiment was ordered by General Garrard to fall back and resume its original position in line of battle. Sending forward Company G as picket, remained in position until — o’clock, when I was ordered with my regiment to advance with the brigade, and engaged the enemy, and after a short and very severe engagement, was ordered to fall back a short distance, and were not engaged any more during the day, as the enemy commenced a precipitate retreat to Black River Bridge.

On the evening of the 16th, we proceeded to Edwards Depot, where we halted for the night (having followed in rear of General Benton’s brigade). Before leaving Champion’s Hill for Edwards Depot, I was ordered not to get my regiment into line, from the fact that General Garrard had received orders to follow in the rear of General Benton’s brigade. I heard the order delivered to General Garrard, and think it was by one of General McClernand’s aides.

On the morning of the 17th May, 1863, we resumed the pursuit to near Black River Bridge; took position on the left of the brigade. I then sent Companies A and B forward as skirmishers, and advanced upon the enemy’s right, where they were strongly intrenched. My regiment was on the extreme left of the First Brigade, and advanced over an extensive open plain for nearly 1 mile. This plain is intercepted by a slough, which is about 500 or 600 yards from the enemy’s works. My regiment entered the intrenchments about 150 yards to the left of the enemy’s artillery, without opposition. The intrenchments are located below and near Black River Bridge, running nearly north and south.

The loss of my regiment in the actions of Champion’s Hill and Black River Bridge is as follows:

Upon examining the Regimental Record of Events, the 7th Kentucky suffered five killed, 12 wounded, and five missing for a total of 22 casualties. It can be assumed that two of the soldiers originally listed as wounded, died of their wounds.

No loss at Black River Bridge whatever,

Though Lieutenant John Lucas is quite brief in his report of the Battle of Champion Hill and Black River Bridge, the company and regimental record of events for the 7th Kentucky reveal some extra details. On May 16th, the regiment "proceeded towards Edward's Station on the Jackson-Vicksburg RR. Encountered and engaged the enemy at Champion Hill, Mississippi, routed and pursued the enemy to Edward's Station, remained all night."

Company B adds that the Confederates "fell back to their main force and we kept up a skirmishing fire with them during the engagement going on our right. This company [illegible] Pvt. Woodward Lyttle severely wounded in the hip by a rifle shot. When the enemy retreated in the evening about 5 o'clock." Lyttle, probably left behind, was subsequently captured and paroled as other elements of the Confederate army marched through the battlefield in the days following the fight on May 27, 1863.

Captain Thomas Wilson of Company D was killed while leading his men on the skirmish line. The company also lost "William A. Williams and Martin Flaury wounded. Company F, the other skirmish company, only reports one killed and two captured without providing names.

Company G provides a little more insight. It records "engaged the enemy on the 16th May, 1863, after a severe engagement the enemy was again repulsed with a heavy loss (Company G orderly sergt wounded in left shoulder by the explosion of a shell)." Company H records, "The company was again in the Battle of Champion Hills May 16th where Sergt. Wm Disney was killed and Daniel O. Prewett mortally wounded (since died)." 7th Kentucky soldier Larkin Hubbard of Company I recorded in his diary that William Disney was killed, and according to Disney's records, he received wounds in both arms, which I assume was caused by an exploding shell, canister, or from volley fire. Disney was 34 years old. Daniel Prewett (sometimes Pruitt in the records), is recorded to have received a sever wound in the "body and flesh." Prewett's wounds also proved to be mortal as recorded in the Company Record of Events, however, he lingered on until May 30th, having also been captured an paroled while at the field hospital.

Company I provides little information except that two men were wounded. Luckily, Larkin Hubbard recorded, "We had a Picket fight the 15 of may clos to Ray mond Mississippi the Battle commenced a bout 8 miles from ray mond on the Champion Hill the 16 they fought all day[.] Our regiment commenced Battle Wm Baker was killed ded John marlow was wounded in the Knee..." In another reference to William Baker, Hubbard adds that Baker "was killed in a few steps of me and nevers spoke. I was mity sarrow to see him kiled I liked Wm Baker." As you can tell, Hubbard's diary is not the easiest to read, or decipher. He references Champion Hill in several places, this being one. He later adds, "we whiped the rebels on the 16 May on the Champion hill." Company K reported only two wounded.

From the records of Daniel Pruitt. It is difficult to read, but it records his death from wounds received at Champion Hill. 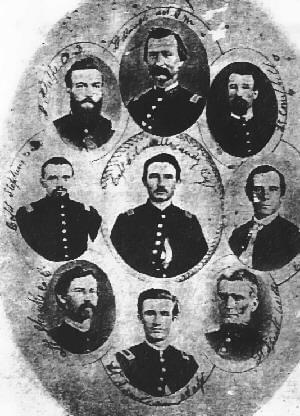 As Lt. Col. Lucas states, the 7th Kentucky as a part of Grant's army, continued westward in pursuit of John Pemberton's army. At Black River Bridge, the day after the Battle of Champion Hill, the Federals easily pushed the Confederates away from their defensive works and chased them into Vicksburg. The 7th Kentucky participated in this action as well, without losing a man. The regiment then took part in the assaults on Vicksburg, which ultimately failed, and then marched east to the Black River Bridge to guard against a possible rear attack by Joseph Johnston's Army of Relief. Following the Vicksburg Campaign, the 7th Kentucky saw little action. As a regiment in the Department of the Gulf, they garrisoned New Orleans and Baton Rouge until the end of the war.

From an August 1863 article in the Louisville Courier.

The 26th Kentucky at the Battle of Nashville